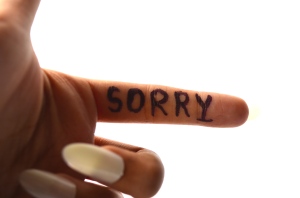 Forget Ebola, I have my own health crisis to deal with. I’m currently suffering from the common cold, and believe me it’s no party.

Due to my profession and faux-socialite lifestyle, I meet a lot of people. And whether I like it or not, I shake a lot of hands. Statistically speaking, a handshake is the most common and effective way of spreading germs. If you’ve got a cold and you’re not regularly interacting with children or the elderly — both of whom I avoid like the plague or, dare I say, like a cold — then odds are you contracted your illness by shaking hands with some filthy, diseased troglodyte who has neither the patience nor the foresight to wash his own hands. So this is how I assume it happened — some mouth-breathing lowlife was too busy sneezing and coughing to rinse his sweaty palms, and now here I am suffering the consequences.

Which begs the question: why on earth are we still shaking hands with each other? When you think about it the whole custom is sort of gross and very weird. When it first began one person would firmly grasp the wrists of another upon encountering them to ensure they weren’t armed. Of course, this completely ignores the simple fact that there are places to hide a dagger other than up your sleeve, but at least our predecessors had a justification for this whole obscure exercise. Since then the handshake has devolved into a perverse social custom that punishes healthy, upstanding citizens with germs and illness, and rewards the grotesque underbelly of society by allowing them to briefly experience the thrill of human touch. The whole thing is nonsense.

So how is this nasty trend going to end? I hate to admit it but the fact is that we may be programmed to expect to experience some sort of ritualistic touching upon encountering those with whom we will interact. Just think of the awkward moment when you approach a member of the opposite sex who you know reasonably well but not intimately — should you hug, shake hands, just wave politely? The whole scenario is a standoff with no winner.

The only way to bring down the house of cards that is the handshake is with something equally simple that gives us our “nice to meet you now let’s touch for no particular reason” fix. Thank god that in our modern society, with all of its useless social trends, the perfect alternative has already presented itself. That’s right: the fist bump. Also regarded as the “pound” or the “terrorist fist jab,” the fist bump is a perfect way to acknowledge that you’re not completely disgusted by those around you (even when you are) without engaging your immune system in a potential Battle Royale.

So who’s with me? Who’s ready to take a stand and say goodbye to the germ-spreading, creep-encouraging, socially perverse trend that is the handshake? Let’s be honest, no one will miss it.