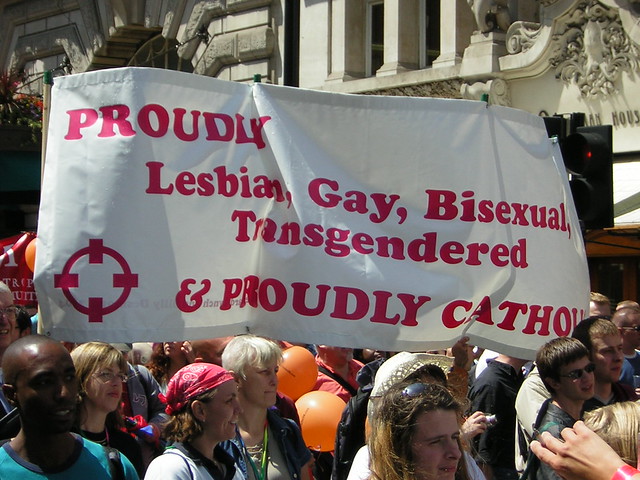 From the Wall Street Journal’s article:

The Vatican on Saturday fired a monsignor who came out as gay on the eve of a big meeting of the world’s bishops to discuss church outreach to gays, divorcees and more traditional Catholic families.

Monsignor Kryzstof Charamsa was a mid-level official in the Vatican’s doctrine office. In newspaper interviews published in Italy and Poland on Saturday, he said he was happy and proud to be a gay priest, and was in love with a man whom he identified as his boyfriend.

“The decision to make such a pointed statement on the eve of the opening of the synod appears very serious and irresponsible, since it aims to subject the synod assembly to undue media pressure,” said the Vatican spokesman, the Rev. Federico Lombardi.

I had to read that quote from the Vatican spokesman three times before I understood they were referring to Monsignor Charamsa’s decision to come out and not the Vatican’s decision to fire him.  Free advice for the Vatican: when a priest publicly comes out as gay the day before your big meeting to discuss outreach to gays, maybe use that as a jumping off point instead of immediately firing him.

The Vatican’s position on gays in the Church has become a bit murky: it’s not a sin to be gay as long as you don’t act gay (note: acting gay does not include wearing a FABULOUS bedazzled robe that would make Elton John blush, or abstaining from romantic relationships with women); the Pope met Kim Davis but he didn’t meet with Kim Davis, and meeting her does not mean he endorses her actions even though her actions are consistent with Church doctrine; the Pope did meet with his gay friend because he really wanted to give him a hug; and now, the Church is reaching out to gays but an openly gay priest must be fired.  It’s a bit of a mish-mash so forgive me — like you’re supposed to — if I have trouble finding the common thread.

So at this point it’s not clear what the Vatican’s “outreach to gays” will actually look like, but it’s apparent that attempts to woo gay parishioners are part of a larger effort to appease more progressive Catholics who have been leaving the Church en masse, even with the most progressive Pope in recent history at the helm.  By Vatican standards, “progressive” is a very broad term.

← Schadenfreude, in quiz form!
Justice Stevens on How to ‘Fix’ the Second Amendment →
Join 12 other followers